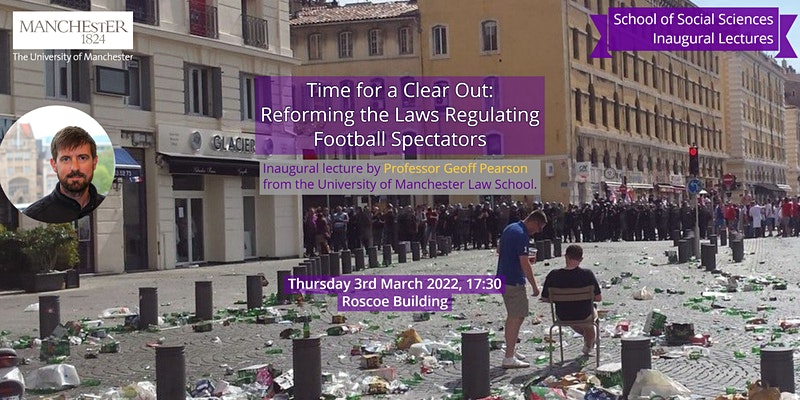 ‘Time for a Clear Out: Reforming the Laws Regulating Football Spectators‘, to be held at University of Manchester on Thursday 3rd March, 17:30-18:30. Register for a free ticket.

Legal measures designed to prevent football-related disorder have been fundamentally reactive and some bear all the hallmarks of the worst kind of “panic law”, rushed through without sufficient scrutiny and proving either ineffective or counter-productive to the problems they are seeking to confront. Some provisions are still seeking to confront problems from the 1980s, failing to respond to how the football industry and fan behaviour has fundamentally changed since then. Others have hampered the ability of police forces to develop more effective and legitimate tactics and strategies to manage football crowds. In this lecture, Prof Geoff Pearson considers evidence from 25-years of research into legal and policing responses to football crowd disorder, putting forward recommendations for reform of the law and the way police forces utilise legal powers to prevent football spectator violence and disorder.

Part of Professor Pearson’s current work is the ENABLE project, which applies the latest developments in crowd psychology and human rights law to football policing in the UK. Led by Prof Pearson and Professor Clifford Stott at Keele University, the project began in 2017 with a £7,200 grant from the N8 PRP Training and Innovation Fund to identify and develop best practice in the policing of domestic football. ENABLE then secured £200,000 from the English Football League to develop the research, including work with N8 PRP partner forces West Yorkshire, Cleveland, GMP, Lancashire, and Northumbria. As a result of this work the team was asked to contribute to the new UK Football Policing Unit’s (UKFPU) Authorised Professional Practice and collaborated with UKFPU to run training on the new APP in September 2021.

Professor Pearson also supervised an N8 PRP-funded PhD thesis on ‘A Human Rights Approach to Football Policing’ by Martin Browne. The summary report from this project will be available shortly.

For further N8 PRP-supported work on Public Order and Crowd Management, and other research themes, please go to the Research Index.

This lecture will be relevant both to researchers and practitioners working in public order, crowd management, and human rights, particularly on football policing.