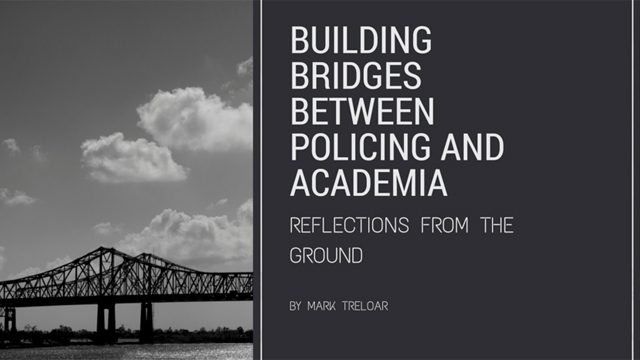 Building bridges between policing and academia – reflections from the ground

A journey from Australian police officer to UK postgraduate

My background is as a community police officer within Australian Capital Territory (ACT) Police [www.police.act.gov.au]. There are a lot of similarities between policing in England and Wales and in Australia. Police in both jurisdictions receive calls for assistance, with jobs created, dispatched, and attended by uniformed officers. These jobs are assigned a ‘priority’ based on their seriousness in line with the Peelian approach to “policing dangerousness”. For the last seven years my role involved attending a broad range of incidents. Some of the incidents that stood out to me most were those around domestic violence and abuse, which I attended on a weekly and often daily basis. This involved investigations, working with victims, and supporting them through the court process. At its most extreme, it involved assisting investigations of two intimate partner homicides.

My academic experience began with a Bachelor of Policing by distance education in 2013; I was able to complete the degree whilst working full time, and thus make connections between the theory studied and parallel police work. I am currently on leave from the police studying a Masters of Criminology and Criminal Justice at Durham University in the UK, and this has made further links apparent between my practical experience and the coursework. Additionally, Durham University is home to the Centre for Research into Violence and Abuse (CRiVA: www.dur.ac.uk/criva/), and after joining this centre I have been fortunate to work closely with a number of leading academics.

One of the clearest differences between academic and police worlds is the setting within which their respective work is conducted. Academia is typically an environment conducive to in-depth research, analysis and critical thinking: this gives a powerful ability to formulate recommendations and cohesive, well-constructed arguments addressing issues underpinning domestic violence and abuse.

Policing, on the other hand, operates in a time-poor, high-stress environment with officers often affected by the “fight-or-flight” sympathetic nervous response triggered by perceived threats to their safety. As such, front-line policing of domestic violence incidents, which carry inherently higher risks than most other job types, is done in adrenalized situations where critical thinking is often impaired by unavoidable physiological responses to stress.

Furthermore, my experience was that even a ‘normal’ working day would not allow officers to fully relax on shift, as a high-priority radio call could come in at anytime and lead to urgent driving, possible use of force, and a risk of injury or death to the public and responding officers. Whilst such incidents occurred sporadically, it none the less meant that officers were always “on edge”. Contributing to this was our training, including self defence and firearms, which consistently reminded us about the risks we would face and the need to be ever vigilant. My personal experience has been that this stress cannot be completely avoided, but also that it may lead to errors of judgement around domestic violence.

To address this, I believe there needs to be a better understanding by both police and academics of the different worlds in which they each operate, and the benefits and challenges that these bring. Police, for example, are adept at making prompt decisions in high-risk situations that safeguard life in the short term. Academia’s strengths are in research and critical analysis, and harnessing these to shape policy in the medium to long term.

I believe there are major benefits to cross-pollination between academics and the police: firstly, officers would benefit, through further education, from the theories and best practice which the academic world champions. This can lead to “light-bulb” moments where deeper truths are revealed, and improved provision of policing services to the community. Vice-versa, academics who gain a deeper understanding of the stressful environment of policing domestic violence are better placed to contribute practical research and policy advice in formats readily deployable as ‘best practice’ by police organisations.

An opportunity to benefit from the differences

Moving from policing to academia has given me a number of insights into the two worlds which may benefit the policing of domestic violence.

Firstly, being able to study with a background as a police officer has revealed the benefits of sharing between these two worlds, and the possible advantages this can have for policing, academia, and society more widely.

Secondly, understanding the differences in academic and police environments will improve the relationships between practitioners in each field, particularly around the high stress police environment at the coal-face of domestic violence.

Finally, by bridging this divide there are opportunities for police to learn how to think more critically and longer term, and academics to conduct research and support policies which can be successful in the stresses of the real-world.

Academic centres such as CRiVA and networks such as the N8 Policing Research Partnership [https://n8prp.org.uk/] champion just such a practical approach to research and policy, and the cross-pollination between academia and police advocated here should further this goal