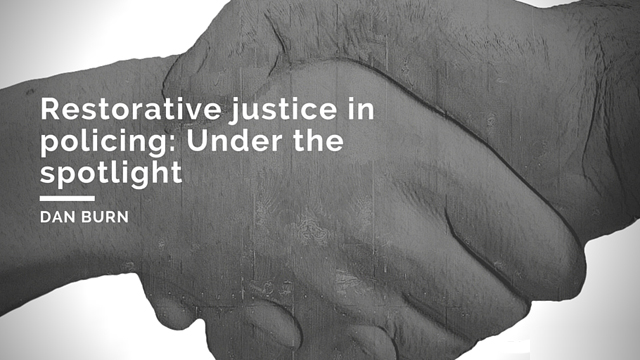 Restorative justice in policing: Under the spotlight

A research team based at the University of Sheffield and the University of Leeds has secured £336,000 from the Police Knowledge Fund. The project aims to develop greater understanding of restorative justice principles relevant to policing and the research evidence base that informs good practices that are sensitive to the needs of victims. The research is being conducted in collaboration with the project partners in three police force areas – South Yorkshire, West Yorkshire and Humberside. It also benefits from the involvement of Remedi, a specialist voluntary sector organisation.

The 18-month project commenced in late 2015 and will complete by the end of June 2017. It is led by Professor Joanna Shapland and Professor Adam Crawford and the research team includes Dr Emily Gray and Daniel Burn. It will assist the police in identifying means for front-line officers to assess which paths to use to facilitate restorative policing and how best to introduce restorative principles to victims of crime.

The research team is currently conducting interviews and focus groups with a range of stakeholders across the three police force areas, to investigate how restorative justice is currently being delivered and how it can be improved. Those interviewed so far include senior police officers (including specialist officers) and police staff (such as analysts), as well as Youth Offending Teams and other specialist restorative justice services. The next phase of the research will involve focus groups with frontline police officers, as well as observational research. It will also learn lessons from comparative developments in Northern Ireland and Belgium by way of research visits and interviews with key practitioners.

The research will draw upon the existing national evidence base which includes Professor Shapland’s seven-year research study for the Ministry of Justice, on the effectiveness of the first restorative justice pilot schemes in the UK. This explored the benefits of restorative justice for victims of crime as well as the impact on reoffending rates. The study findings helped influence the Ministry of Justice’s commissioning and sentencing options in England and Wales, and informed legislation including the Crime and Courts Act 2013.

“This project is particularly timely and important given recent changes and developments in the commitment to police organisations and the delivery of restorative justice. The proposed collaboration with the Universities of Sheffield and Leeds will enable us to better understand and improve our practices in delivering restorative justice and improve engagement with victims.”

Justine Curran, Chief Constable of Humberside Police, said:“We are delighted to be involved in this pioneering partnership and innovative programme of research and development work. We look forward to helping ensure its successful implementation and to maximising the benefits and lessons that derive from the research and knowledge it will generate.”

Matthew Grove, the Police and Crime Commissioner for Humberside, added: “This research will hopefully help to demonstrate the benefits and evidence base for restorative justice in practice and, when used appropriately, show how it can improve community safety and wellbeing and strengthen civil society.”

In affirming his support for the research project Dr Alan Billings, Police and Crime Commissioner for South Yorkshire noted: “This research project fits in with the development and policing plan for restorative justice that is already financially supported through my office.”

Steve Jones, Director of Remedi, added: “We feel this research will act as the catalyst for change in ensuring both the quality and effectiveness of restorative policing and, by doing so, enable the full potential benefits of restorative justice for victims of crime and offenders to be realized.”

Professor Joanna Shapland, Principal Investigator on the project, from the University of Sheffield’s School of Law, said: “We are delighted to be awarded this grant by the Police Knowledge Fund and to be working with the three forces to help them develop restorative policing and to improve their work with victims of crime.”

The research connects well with and complements the work of the N8 Policing Research Partnership which the research team are members of and Professor Crawford is the director. The partnership is a research and knowledge exchange collaboration between universities and policing partners that aims to strengthen the evidence base and foster innovative approaches to policing and crime reduction. Professor Crawford said:

“This important new research into restorative policing is a further example of the manner in which N8 universities are collaborating with policing partners in novel ways to co-produce knowledge that will inform future policing strategies and help ensure police practices that conform with the best research evidence available.”

The Police Knowledge Fund is funded by a combination of the Higher Education Funding Council for England (HEFCE) and the Home Office and overseen by the College of Policing. It was set up specifically to encourage collaboration between academia and police forces to increase evidence-based knowledge, skills and problem-solving approaches within policing.

Policing and the N8 Research Partnership
The manipulative presentation techniques of control and coercive offenders: What are they and how ca...
Spice and police custody: there must be a better way