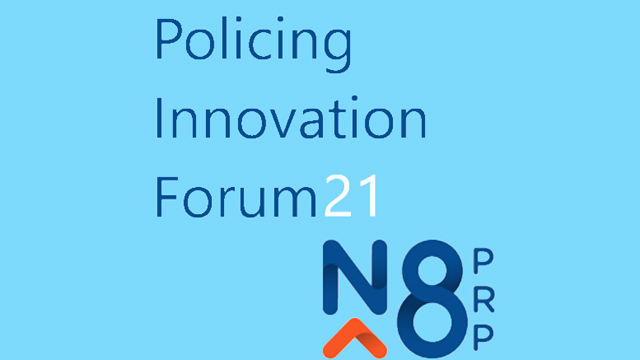 The sixth N8 PRP Policing Innovation Forum began on Wednesday with a lively and varied session on ‘What Works in Police Partnerships?’ The session was chaired by Professor Joanna Shapland, Edward Bramley Professor of Criminal Justice at the University of Sheffield, and moderated by Dr Geoff Pearson, Academic Co-Director of N8 PRP.

The programme, with speakers from HMICFRS, North West Policing Divers Unit, and US and UK academia, attracted plenty of attention with 77 people logging onto the event, with c.50 attendees from UK police forces. The high level of engagement from UK police is a testament to the commitment to developing evidence-based policing and effective partnerships across the UK, and to the ability of N8 PRP to create networks that enable that development.

In the first session, on inter-police partnerships, HMI Matt Parr discussed The Hard Yards project, an examination of 6 inter-police collaborations covering over 50% of forces in England and Wales. The report identified good practice and areas for improvement on the themes of purpose, cost/benefits, governance, and capability, concluding that collaboration shouldn’t be pursued for its own sake but only when it will help to achieve clear goals. The criteria for success was illustrated to great effect in Inspector Richard Reeves’ subsequent overview of the North West Underwater Search & Marine Unit. Insp Reeves discussed how the team effectively maintain capability for diving operations across the region, responding to demand and geography to shape the aims and operation of the team, effectively maintaining capability for diving operations across the region.

In the Q&A session, the comparative merits of collaborations and mergers were discussed. HMI Parr agreed that collaborations could be more fragile, but protected local accountability. He also discussed HMICFRS’s Network Code as a means of formalising partnerships by ‘pooling’ sovereignty to better enable the sharing of resources, which he thought had the potential to deliver substantial improvements service to the public. Inadequate IT resources were also discussed and identified as a major obstacle and time-drain for creating inter-force partnerships, with the new Police Digital Service sited as a potential reformer in this area.

In the second session, the fragility of police-academic partnerships were discussed, beginning with three leading US academics. Professors Geoffrey Alpert, Jeff Rojek and Kyle McLean examined how highly-publicised instances of police brutality in the US, and the subsequent protests, has exacerbated tensions in the alliance of police and police researchers that had grown up 4 or 5 decades. Notably, colleges now see any kind of collaborative work with the police as reputational risk. This upheaval, coupled with the shock of the Covid shutdown, has created a dramatic shift internally within the two communities. To sustain partnerships between these divergent communities, there needs to be understanding of how structural characteristics (such as financial support) and participant’s values, and investment in building interpersonal relationships that created trust between partners, so relationships can be renegotiated in response to significant changes.

Prof Shapland also discussed the fragility of partnerships. As partnerships were usually formed in response to a specific project, there was little on-going contact and so partnerships could be erased by changes in personnel. This could make collaboration an afterthought – for example with academic evaluation of a project tacked on at the end rather than included in the design from the start. Prof Shapland concluded that academic-police partnerships were inevitability fragile because the aims, timescales and incentives of the two groups was fundamentally divergent. However, regular contact and discussion could create advocates for the partnership at their respective institutions, creating better possibilities for more effective research.

In the Q&A session, research ‘on’ rather than ‘with’ police was discussed. The speakers agreed there was still appetite for this in the academy, but the burden on police time without a clear benefit made it difficult to get access. Networks like N8 PRP were cited as very useful for increasing the profile and value of research mong forces, and it was agreed that it was good practice to let subjects of research to have site of the work before publication. This gave an opportunity for discussion and clarification, and meant subjects wouldn’t feel ‘ambushed’ by critical findings.

The speakers were asked whether they thought the UK universities could start to draw back from wanting to support research with the police, as has happened in the US. Prof Shapland gave the view that the problems of racism and violence towards protestors were not new, so were unlikely to be the catalyst for such a shift in the UK. However, if the new powers granted to police Covid lockdown compliance continued, this could create difficulties for researchers who might find themselves targeted after writing critically about the police.

From guests to partners

In the final session of the day, Dr Layla Skinns looked at partnership working in response to vulnerability in police custody. Dr Skinns discussed the changing concept of vulnerability from lists of ‘protected characteristics’ to a model of universal vulnerability, the growing role of Healthcare Partners (HCPs) and Liaison and Diversion (L&D). HCPs and L&D could be seen as ‘guests’ on the police ‘territory’ of custody, but decision-making was effectively delegated to them even though the official responsibility remained with the custody officer. Dr Skinns suggested there consideration of moving to a universal concept of vulnerability, creating an ‘opt out’ approach. However, this would be more resource-intensive. Finally, Dr Skinns suggested that formal responsibility for decision-making should be divested to HCPs and L&D, so that codes of practice matched the on-the-ground reality.

In the discussion, the opinion was given that the automation of custody procedures wasn’t fit for purpose, and was hampering the ability of custody officers to respond to specific circumstances. One attendee asked if the police were ambitious enough in the partnerships with support services, and thought there should be more interventions. Dr Skinns replied that changing the conception of vulnerability would better capture the need for services, and both the law and codes of practice should be brought into line with actual practice.

Prof Shapland wrapped up the day, highlighting common themes of the talks. Firstly, it’s clear that working together is essential, but is currently ad hoc. The HMICFRS approach of more formalised networks could be a way of addressing this. Secondly, how to resource partnerships was a common point of contest. Thirdly, how can the effectiveness of partnerships be measured? For inter-police partnerships this could be primarily about cost, but where different communities worked together, aims become more diffuse and need to be more clearly acknowledged.