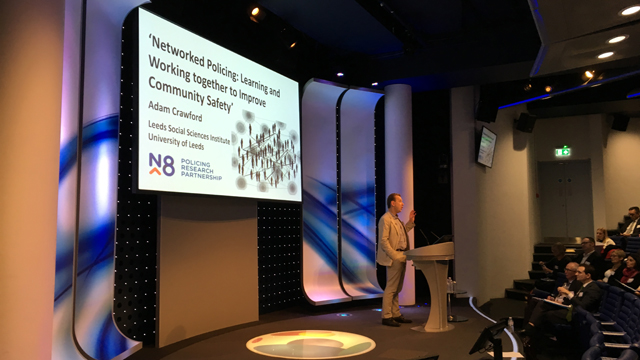 ‘Networked Policing: Effective collaboration between police, partners and communities’ was the title of the Police Foundation Annual Conference held recently at the BT Centre in London on 29 November 2017. In this blog, Sean Butcher provides a personal account and reflections on the debates and themes of the day.

Police services face unprecedented levels of local demand. The complexity that characterises contemporary forms of crime, coupled with the impact of reductions to police budgets, suggest that the need for effective joined up approaches to community safety has rarely been greater. In recognition of this demand, ‘networked policing’ featured as the focus of the recent Police Foundation Annual Conference for 2017. Delegates from public services, community and third sector organisations, academic institutions, think-tanks and policy units gathered for a lively and thought-provoking discussion about recent developments and continued challenges for interconnected approaches, as well as prospects for the future.

For me, five key points emerged from the day’s proceedings:

Networked policing is often discussed as if it were a new or novel venture. In fact, as Sir Bill Jeffrey (The Police Foundation) noted at the beginning of the day’s proceedings, calls for integrated approaches to crime prevention and community safety have featured to varying degrees throughout much of the last three decades. In his opening address, Professor Adam Crawford (Director of the N8 Policing Research Partnership) recounted some of this history by drawing upon a 1984 Government circular. It acknowledged that the police alone could not be expected to effectively resolve multi-layered ‘wicked issues’ (Rittel and Webber, 1973). Instead, the crime prevention potential of whole communities should be engaged, as part of broader problem-oriented solutions (Goldstein, 1979). And whilst it was acknowledged that the implementation of networked strategies in the period since has been rather more piecemeal, belief in the respective utility of joined up approaches has remained intact.

Though not a recent development, the need for networked policing approaches has nevertheless become more pressing. Chief Constable Ian Hopkins (Greater Manchester Police) acknowledged some of these pressures when presenting his case for change that placed networked approaches at its heart. His case acknowledged various impacts of the changing nature of vulnerability and crime – both in societies subject to the forces of globalisation, and, conversely, in communities that have become increasingly socially atomised as local landscapes have altered. In these settings, he conceded, ‘single agency responses’ were of limited use. Neither were they particularly sustainable, in light of continued budgetary constraints. Rather, reductions to personnel and resources merely reinforced the need to work differently with partners and communities, utilising their potential in order to bring effect to more desirable and long-term future solutions.

The event showcased some excellent examples of networked approaches, and the value that, where done effectively, these can bring. Professor Crawford recounted a series of positive impacts from partnerships within multi-agency safeguarding settings, and in knowledge exchange partnerships between police forces and universities. Will Linden, of the Violence Reduction Unit, Scotland, powerfully argued the merits of a ‘person centred assets based approach’, that both recognises the degrees of complexity that characterise social problems, and that engages in meaningful co-production with communities in order to address these. This argument was later brought to life in a fascinating workshop led by Brendan O’Neill (Bluelight Consultancy), who recounted a series of personal experiences of problem solving through community engagement. Effective solutions to long term problems, he concluded, needed to move from the cycle of dependency placed upon police (most vividly illustrated by the culture of ‘you said, we did’), towards a re-imagined police role concerned with connecting and enabling citizens’, communities, and their crime prevention capacity.

Despite the encouraging range of examples presented at the event, it was reiterated throughout that there can be no illusions about the continued and longstanding difficulties of ‘doing’ networked policing effectively. In his address, Professor Crawford reflected upon the old barriers of reluctant participants, dominant agendas, or lack of trust. Whilst some of these appear to have been eroded, other barriers remain – such as the evident continued reliance upon informal networks, which raises questions as to the robustness and sustainability of arrangements in the long term. Professor Crawford also noted the challenge of reconciling differing objectives of organisations. This was a challenge that emerged from the paradox of partnership work: that the advantage of being able to draw upon different areas of expertise necessitates the presence of practitioners from organisations serving different purposes. These different purposes inevitably inform those different objectives – and in turn may inform a source of tension.

The event illustrated how far networked policing has come, but also how much further it has yet to go. London’s Deputy Mayor for Policing, Sophie Linden, reminded delegates that in a break from general trajectories of the past two decades, police recorded crime was beginning to rise – and that in order to meet the challenge this poses, efforts to form closer working partnerships between police, communities and other public services would have to be redoubled. In an earlier contribution, Dr Rick Muir (The Police Foundation) outlined three steps by which an ambition for further joined up approaches might be realised. First, power should be more evenly distributed at the local level. City devolution has been a welcome development, and localised police governance has been given a further shot in the arm as a result of the introduction of Police and Crime Commissioners. But these continue to operate within a largely centralised framework that restricts their potential. Second, the public service workforce needs to better reflect contemporary social changes and problems – by featuring combined roles that can bring greater effect to innovative prevention strategies. Finally, deepening links with communities should be afforded a much greater degree of attention and investment – so as to reflect their potential as a fruitful means of addressing deeper problems in a meaningful and sustainable fashion.