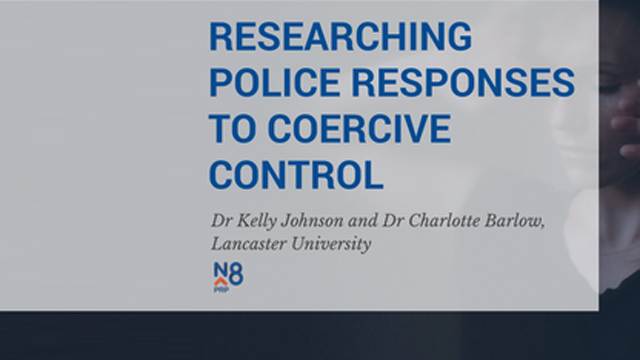 Physical violence is now understood to be just one of many methods of domestic abuse, with psychological, emotional, coercive and controlling methods being increasingly acknowledged in academia, policy and practice in the UK. Over the past few years there have also been substantive legislative changes in this regard. On 29 December 2015, under Section 76 of the Serious Crime Act, engaging in controlling and/or coercive behaviour in intimate or familial relationships became a new criminal offence in England and Wales. The introduction of this offence has been upheld by many as a progressive step forward. It recognises the everyday realities of many abuse victims and survivors and provides a means to reform police and broader criminal justice responses to domestic violence. Particularly, given coercive control’s emphasis on the sustained ‘web’ of abusive tactics (with or without the presence of physical violence) this offence challenges the typically violence- and incident-focussed conceptualisation of domestic abuse present within policing (see e.g. HMIC 2014, 2015), which overlooks and minimises the harmful, cumulative impact of coercive and controlling behaviour (Stark 2007).

Nevertheless, academics have raised significant concerns about the introduction of the new offence (see e.g. Fitz-Gibbon et al. 2018). However, to date, critique has remained mostly conceptual and there is little empirical research exploring how the coercive control legislation is working in practice. Our N8-funded research addresses this lacuna. In collaboration with Merseyside Police, myself, Charlotte Barlow (PI) and Sandra Walklate are conducting a mixed methods study, analysing police responses to domestic abuse cases since the introduction of the coercive control offence. We have conducted a range of statistical analysis on all domestic abuse-related crimes and incidents that were recorded by Merseyside Police over an 18-month period. Additionally, the case files for each recorded crime of coercive control that took place during this time were examined in detail, using thematic and discourse analysis. The same qualitative approach was applied to a random sample of other domestic abuse crime types, such as assault, for comparative purposes. Once finalised, this research will establish a much-needed empirical evidence base on the impact of the new coercive control legislation in the context of policing domestic abuse, to inform academic debate, policy and practice. With contributions from Merseyside Police, Women’s Aid, the CPS and other valued advisors, the project will additionally develop a ‘learning tool’ to be used by police forces.

Early project findings have painted a complex picture of how the new coercive control offence is playing out in police practice. Our quantitative analysis has revealed that, of the 19,000 or so domestic-abuse related crimes recorded by Merseyside Police over an 18-month time period, only 156 of these were listed as S.76 coercive control offences. These 156 crimes of coercive control took place overwhelmingly in the context of an intimate-partner relationship, with a female victim (95%) and a male perpetrator. Compared to other cases of domestic abuse-related crimes, calls for service (i.e. 999 calls) made in the context of coercive control cases were given a lower priority grading by call handlers, however victims of coercive control were significantly more likely to be subsequently assessed by responding officers as being at ‘high-risk’ of harm. Despite this, in our data sample, recorded coercive control cases had a lower rate of arrest than other domestic abuse offences and a particularly low ‘solved’ rate (16%).

Further complexities become apparent through our qualitative analysis, which points to issues with the identification, recording and investigation of coercive control in policing responses. For example, our findings suggest there were missed opportunities for using the coercive control offence. Where it was used, a significant number of coercive control cases faced no further action due to ‘evidential issues’. We believe the prevalence of this outcome is connected to officers struggling to demonstrate experiences of sustained coercive control within victims’ statements. Additionally, we noted officers frequently failed to capitalise on other available sources of evidence when investigating coercive control cases, such as other third-party witness statements, and physical or digital evidence. Moreover, the research has also highlighted other concerns that require academic attention and critique, such as broader problems with the coercive control legislation and criminal justice responses to domestic and other forms of gender-based violence.

Currently our final conclusions remain a work in progress, but we hope to showcase our findings and launch our coercive control ‘learning tool’ at a free conference on coercive control at Lancaster University on 27 June. Please come along if you are interested, or get in touch to find out more about our project.

A blog by Chief Superintendent Ngaire Waine, Head of Criminal Justice at Merseyside Police and N8 PR...
The manipulative presentation techniques of control and coercive offenders: What are they and how ca...
Veteran’s offending and policing practice: a conversation starter