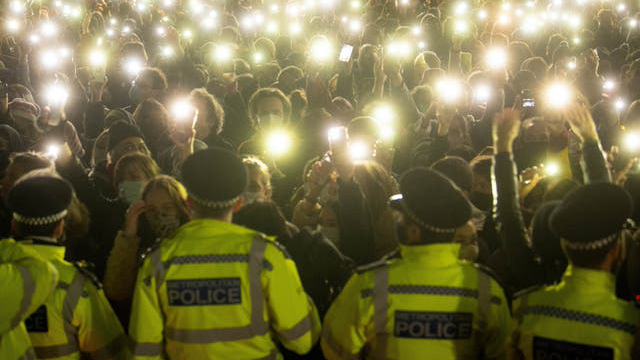 N8PRP Academic Director, Professor Geoff Pearson, looks back on the policing of assembly during the pandemic, and forwards to the new Policing Bill and asks if we are facing a new crisis of legitimacy in the police.

The Health Protection Regulations introduced during Covid-19 gave the police in England and Wales broad, and in modern times unprecedented, powers, and unusually-wide discretion to restrict movement and curtail gatherings. However, forces were also expected to enforce these proportionately and in compliance with human rights law. From the outset, there was confusion between and within forces, misuse of the Coronavirus Act, and media criticism for both under-enforcement (e.g. for not attempting to prevent BLM protests) and over-enforcement (e.g. the fining of two women attempting to have a picnic in the Peak District). The highest profile criticism was reserved for the Metropolitan Police’s management of the Sarah Everard vigil at Clapham Common in March 2021; amongst others, HMICFRS and a Parliamentary inquiry criticised the force for misunderstanding and misapplying the regulations, wrongfully ruling that there was a blanket ban on protest, and failing to liaise with protest groups in order to mitigate the risk of the spread of infection at the planned gathering.

It is broadly acknowledged that the myriad of Health Protection regulations were complicated in form, sometimes contradictory or badly written, frequently re-written, and often only published moments before they were due to come into force. Our research into police use of powers pre-pandemic [https://www.bloomsburyprofessional.com/uk/police-street-powers-and-criminal-justice-9781509925377/] noted how the meaning of even established law and policy often changed as it cascaded down the ranks, and how understandings of it varied between officers (we refer to these processes as vertical and horizontal fragmentation). It should therefore be no surprise that the Health Protection regulations proved such a challenge to enforce on the ground, particularly in relation to protests where the impact of the regulations on gatherings was widely misunderstood.

Of course the pandemic was a completely unprecedented situation, but does the experience of policing these broad powers to restrict movement and restrain assembly tell us anything about the future of policing in England and Wales?

The Policing, Crime, Sentencing and Courts Bill received its third reading in July 2021. Once passed, the Bill will, amongst many other powers (including some long-overdue and positive tweaks to the criminal law), provide the police with greater powers to place onerous restrictions on protests and other gatherings, potentially restricting size, location, duration, and noise levels. These powers can be used for protests, processions, or assemblies that a senior officer believes could cause “serious disruption” to businesses or “serious unease” to members of the public. Further, the Bill also enhances the ability of the police to take action against those breaching conditions, along with potentially draconian sentences. The wide discretion that forces had during the pandemic to restrict gatherings is, in a manner, extended by the new Bill.

Learning from the policing of the pandemic, the new powers pose a very serious potential challenge to police legitimacy in England and Wales for three reasons.

First, the new powers may not reduce the number of gatherings that cause “serious unease”, but may instead create more conflict between citizens taking part in assemblies and the police trying to curtail them. This conflict has the potential to lead to the use of coercive police powers, and even riot tactics. Decades of research, from social psychology in particular, tells us that where these such tactics are seen by crowd members as illegitimate, they can spark or exacerbate disorder.

Secondly, the new powers pose the risk of financial and reputational damage for forces through legal challenges under the Human Rights Act 1998. There have been a number of attempts recently to encourage chief officers to “rebalance” human rights in protest policing in favour of property and business owners. However, while the HRA 1998 remains in force in its current form, such encouragement, and the new powers under the Policing Bill, do not alleviate the obligations of forces to facilitate Freedoms of Assembly and Expression under the European Convention on Human Rights. The ECHR and HRA 1998 will continue to protect peaceful assembly, and can do so even in circumstances where an assembly breaches lawful conditions or where the aim or effect of the gathering is serious disruption. It is therefore inevitable that some forces will be sent like guinea pigs into the High Court to determine exactly to what extent the new powers permit forces to restrict protest.

Finally, through the ability to create and enforce restrictive conditions upon gatherings, the new powers further change the role of the police from being enforcers of the law, to creators of hyper-localised criminal offences. Through the wide discretion provided in interpretation of terms like “serious unease”, and the wide powers to impose conditions, it will be the police who are increasingly asked to determine when, where, and how peaceful protest should take place. In this situation, procedural fairness, which has long been highlighted in police guidance as a key element of ‘good policing’, is eroded; the citizens against whom the powers are enforced will be aware that it is the police themselves who have created the conditions that they are now enforcing.

These three risks – increased conflict and coercive policing tactics, legally untested limitations on the rights of expression and assembly, and the creep of policing into hyper-localised law-making – pose a very real challenge for the long-term legitimacy of the police across the country. Forces are given little choice but to learn, and learn quickly, the lessons from the pandemic, both about best use of wide discretionary powers, and also about how citizens respond to wide-ranging restrictions on their freedoms.