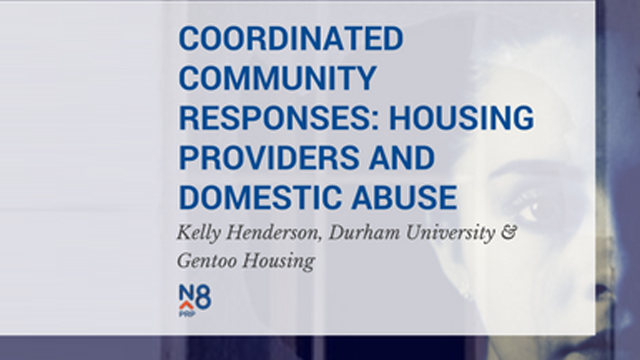 I am in my final year of my PhD at Durham University – my research examines the role of housing providers in a coordinated community response to domestic abuse.

In particular, the research seeks to answer the following questions:

In seeking the views of housing professionals, I conducted an anonymous online survey on their organisation’s response to domestic abuse. The survey had 233 responses and themes identified were then used to inform questions in the semi-structured interviews with housing professionals. In addition some of the survey questions are being used as part of a European-wide survey on domestic abuse and homelessness which will allow for a comparative study.

For the purpose of this blog I will focus on the responses from the survey and interview with housing professionals.

What existing research is telling us

Research has consistently shown that housing is a key resource enabling women to end violence from partners and ex-partners, and that a major reason why women stay in or return to violent relationships is lack of access to safe, long-term, independent, affordable accommodation, (Pahl,1985; Mooney, 1994; Morley, 2000; Malos and Hague, 1993; Charles; 1994).

Kelly, Sharp and Klein (2014) found in their study of 100 women (in London) that housing providers were in practice often reluctant to remove perpetrators. They argued that the scarcity of social housing in London meant that women placed housing above their own safety. They also found that women lost security of tenure when moving to accommodation from a refuge. Of the 121 women who came into and exited Solace refuges in 2015; 22% had a secure tenancy on arrival whilst only 13% did on departure and 87% of those women left the refuge for continued temporary accommodation.

Scottish Women’s Aid (2015) research into domestic abuse found that 52% of housing staff interviewed were not confident in taking action against a perpetrator. The same research asked women who had experienced domestic abuse if they felt they had a choice about remaining in their home or moving out with 84% saying they felt they had no choice and 78% of the women in the study had to move out of their homes, at least once, because of domestic or sexual abuse.

Women seek help in a variety of ways, a point demonstrated by SafeLives (2015) who found that 85% of victims sought help five times on average from professionals in the year before they got effective help to stop the abuse. SafeLives Insights research (2015) showed that Gentoo customers on average experienced abuse for 3 years prior to engaging with our Support Service, compared with 4 years on average in the SafeLives national data set (which is made up of specialist domestic abuse services). This demonstrates that housing providers due to our unique relationship we have with customers are ideally placed to recognise and respond to domestic abuse as an initial point of contact.

Whilst it can be asserted that housing providers in the main are fairly confident in their role in responding to anti-social behaviour (ASB), they are not always well equipped to understand the underlying causes of ASB where domestic abuse is actually the issue. A point demonstrated by Jackson (2013) who, in her study of a Welsh housing provider found that 9% of all tenants had ASB complaints made against them compared against 40% of tenants who were suffering domestic abuse had ASB complaints made against them.

Data from the survey and interviews suggested that the housing sector response to domestic abuse was largely victim focussed but was often framed in within an anti-social behaviour lens. Whilst some responses detailed action had been taken against perpetrators, many respondents had not personally taken action against a perpetrator and in some cases they had no knowledge of their organisation ever taking action.

Whilst some providers stated the reason they didn’t take action against a perpetrator was due to their victim led approach, some providers were further forward in their approach in taking action against perpetrators in what they deemed more serious cases of domestic abuse where they had what they termed firm evidence. Interview findings illustrated housing providers had a much clearer focus on supporting the victim with some respondents suggesting limited understanding and experience in responding to perpetrators; and where they had used legislation it had come from a typically ASB focus around impact to the community as a whole, rather than the impact on the victim of the abuse. For example:

“Perhaps not specifically as a perpetrator of DV, but in the sense of causing a noise nuisance or other nuisance”

This ASB focus reflected the framing of domestic abuse as a component of ASB with 65.35% of survey respondents stating domestic abuse was situated within anti-social behaviour within the organisation and not as a stand-alone issue in its own right.

As well as framing domestic abuse within ASB, responses highlighted an overall lack of confidence in responding to perpetrators.

“We categorise Domestic Violence and Abuse as ASB – due to the neighbourhood impact.

“We do have written in our policies and procedures that we would take action against perpetrators tenancies. To my knowledge we haven’t done that on a strict basis”.

One respondent highlighted where their organisation had taken action they had been advised by the judge it was not their remit to pursue an injunction for a victim of domestic abuse.

“I went down the route of a without notice injunction and when we went back to Court the Judge said it wasn’t my remit to do that…. it wasn’t a housing related remit which I disagreed with but since then we’ve kind of had our fingers burnt with it”.

Almost four fifths of survey respondents indicated they had had some training on responding to domestic abuse, this largely centred predominantly on recognising and responding purely to victims. No one detailed any specific training on working with or responding to perpetrators and this lack of training and awareness was manifested in the approach taken in supporting perpetrators to address their abusive behaviour.

12.95% of respondents stated their organisation did not treat domestic abuse as a tenancy breach and whilst almost three quarters (73.21%) did, just over half (53.71%) of respondents organisations had actually taken any action against perpetrators highlighting a disparity between policy and action.

Making a practical difference in the housing sector through research.

Having now completed the field work; my main focus is on further developing themes with a view to finalising my thesis. In finishing my research, I am keen that it bridges the gap that can exist between academic research and practice. I hope the research highlights the key role housing can play in domestic abuse and influences the housing sector to better respond to domestic abuse.

Co-production in police research: towards a model of greater inclusivity
Knowledge co-production and the policing of football crowd violence.
Police involvement in the delivery of restorative justice in England and Wales