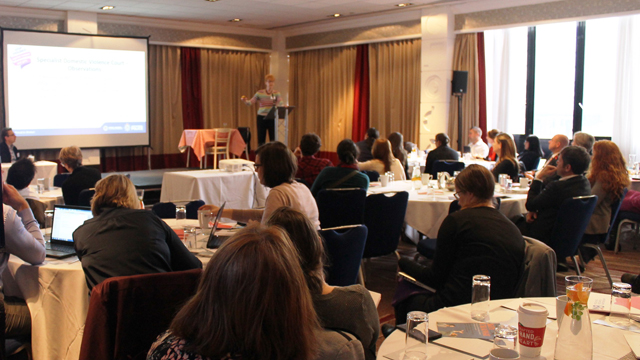 “95 out of 100 domestic abuse survivors in one study reported experiencing coercive control …”, 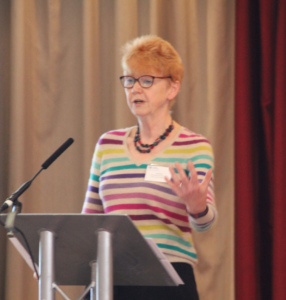 This was a startling account from domestic abuse victims given at the beginning of the second N8 Policing Innovation Forum, held in Manchester in November. Vera Baird QC told delegates this worrying fact as she opened the conference. Vera has worked tirelessly in her position as the Police and Crime Commissioner for Northumbria to tackle abuse, as she launched the first ever Regional Violence Against Women and Girls Strategy with neighbouring PCCs.

Policing faces a huge challenge, despite decades of research, domestic abuse remains one of the biggest issues facing society and one answer to this, delegates were told by Vera Baird, is the imminent need for training with frontline officers to understand the traits and techniques of coercive and controlling behaviour. Highlighting the diverse array of contexts and challenges she suggested a multi-agency approach is needed, using ‘community champions’ to complement already trusted professionals.

Recent changes to legislation on coercive control means that police forces require new innovations around training, evidence collecting, arrests and prosecutions. To help address this and explore the other big questions around domestic abuse, representatives from academia, policing and the third sector recently gathered and engaged in discussions that were wide ranging, delivered by renowned academics and practitioners. Zoe Billingham (HMIC) echoed these challenges saying that increasingly domestic abuse is ‘everyone’s business’. She suggested that while this remains a top level priority, innovations were needed to better translate this into frontline policing.

The morning finished with theatre company Open Clasp performing their award winning play, ‘Rattlesnake’. Introduced by Ron Hogg, the Police and Crime Commissioner for Durham, who sponsored the project, it is based on true events, depicting the devastating and far-reaching impact on victims of coercive control. The play perfectly contextualised the issues of these relationships and truly transported the audience into that world. This provoked an emotive response and discussion, with some suggesting that this might be embedded into training across police forces as an innovative approach to combatting issues of understanding coercive behaviour.

Debate was initiated through a live voting system to capture real time opinions in the room. This produced some interesting results, for example in response to the statement ‘The wide cross-government definition of domestic violence and abuse is unworkable for frontline police.’ 25% agreed while 35% disagreed. This statement among others presented an apparent dichotomy in audience opinion and this developed into lively discussions.

Exploring these topics further, delegates and facilitators articulated a series of important points and questions by which N8 PRP might develop a new research agenda. This included but is not exclusive to:

In relation to practice:

In relation to training and education:

In relation to research:

At the end of the event, all delegates were positive about taking action as a response to the challenges and issues discussed, the final session drawing together the key points for collective action. The N8 PRP will be aiming to collate information from this Forum to with the intention of informing future events and research areas to support this year’s focus on vulnerabilities.

An encouraging point that Vera Baird QC made, in support of a collective call for action, is that:

“There is a widespread need for partnership initiatives for prevention and early intervention which take police out of their comfort zone and require them to work across disciplines. Academic rigour, – which N8 can provide – will save waste and mistakes but the depth of knowledge and high level skills available from this great range of academics and practitioners also contributes to creativity in tackling a social problem which has now been acknowledged for more than thirty years but which remains endemic.”

Note: This article gives the views of the author(s), and does not necessarily reflect the views or position of the N8 PRP, nor any of the partner organisations.